‘The Terracotta Bride: Love, Lies, and AI within the tenth court of Chinese hell’

Disclaimer: I read this piece within the outstanding Spanish edition of Duermevela Ediciones beautifully illustrated by artist QU Lan, with an afterword by Wang Xing and the editors, an introduction by the author, and a few words by the illustrator.

The terracotta Bride, a mixture between a robot and one of the well-known members of the Terracotta Army of Emperor Qin Shi Huang, arrives at Siew Tsin’s house within the tenth court of Chinese hell. Siew Tsin, a young woman that lets the days slip through her fingers like grains of sand, will find herself further and further interested in this mysterious creature who seems more human than initially supposed.

‘If you could make something that resembled a human and endow it with every grace and beauty possible, what else would you invent but an exquisite young woman? There would be a sure market.’

Behind a fantasy novelette that delightfully combines Chinese folklore with an extremely original and powerful wordbuilding, Zen Cho masters to combine science fiction’s characters and topics with classical philosophical and psychological dilemmas. Siew Tsin’s journey of self and Yonghua’s (the terracotta bride) discovery allows the reader to think about the attributes of our human nature.

‘It was a peculiarity of Yonghua’s that she looked people straight in the eye. She did not mean it as impoliteness. It was one of the subtle things that marked her out as inhuman.’

The writer manages to transport the reader and her main character from initial reluctance against an artificial and perfect figure, to curiosity and finally to understanding within a few pages. The book encloses a deep reflection on the true essence of immortality beyond the physical framework of a body. Immortality beyond life as a part of an endless circle of reincarnations but with the baggage of human consciousness, only reachable through the union with a machine like the terracotta bride.

‘[W]hat if we could transfer our consciousness into something that is not vulnerable to the demands of the Wheel? If there was something like that, it would render the idea of past lives and future lives obsolete. All lives would become one.’

What is the difference between Yonghua and Siew Tsin, what does it mean to be human? Is it something intellectual, academic? It cannot be since Yonghua is perfectly capable to learn things and even master them further than her teacher. Is it the capability to experience feelings? Yonghua is capable of displaying attention and devotion to her husband, Junsheng. However, taking into account that she has been created to be a perfect wife, are these feelings real evidence of a quasi-human nature or just pieces of code embedded by Yonghua’s creator? When Yonghua displays regard for other humans apart from her husband, is she just being obedient or showing any kind of affection? As the main character wonders: ‘Did she have feelings, or just reactions?’.

The novelette gives plenty of food for thought to the reader, which I consider particularly admirable and almost necessary within a work of this sort. One can argue that there is not much difference between our brains, machines in conditions to compete with the latest piece of technology, and AI systems as Yonghua. We all have pieces of code, instructions embedded within ourselves that make us take this or that decision, to act in this or that way. Also, feelings are triggered by external elements (or people) and they have an impact on how we conduct such instructions. We all want to be better partners, better friends, better professionals… Thus, to what extent are we not like Yonghua?

‘But Junsheng said they were driven by pure instinct—that once the enforced bonds of duty and fealty had fallen away, only the dregs of their creators’ desires were left to drive the machines, unrestrained by human reason.’

Maybe the one thing that distinguishes humans from machines is our fear of death. Even within a scenario of reincarnation, the population of hell bribes bureaucrats to prevent their moving on to the next step of their journey. However, the existence of Yonghuas, machines to overturn our consciousness to keep it for future lives, threatens the establishment of this mysterious world and the very essence of human nature as well. The book finishes with a beautiful reflection in this respect that I will not reveal within this review, for obvious reasons.😉

‘They were inhumanly strong, nearly indestructible, and subject to none of the restraints that governed the behaviour of humans’

To wrap up, I strongly recommend reading ‘The Terracotta Bride’. The book greatly encompasses traditional topics such as the transcendence of human existence with current debates about AI. All of this is placed within a mystical but corrupted setting that I particularly enjoyed. Further, the rhythm of the book ranged from action to love to discovery within a few pages without pushing the reader out of the author’s spell. The topics dealt with in the book will be very familiar to many kinds of readers but, at the same time, the author manages to make an original turn of the screw to such big questions. I strongly appreciated this and I will conclude with my reflection upon such topics: (Almost) everything has been said, but nothing has been solved. Therefore, there is plenty of room for more books on these matters to come and make us both reflect and enjoy. 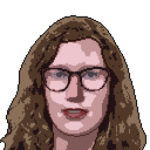