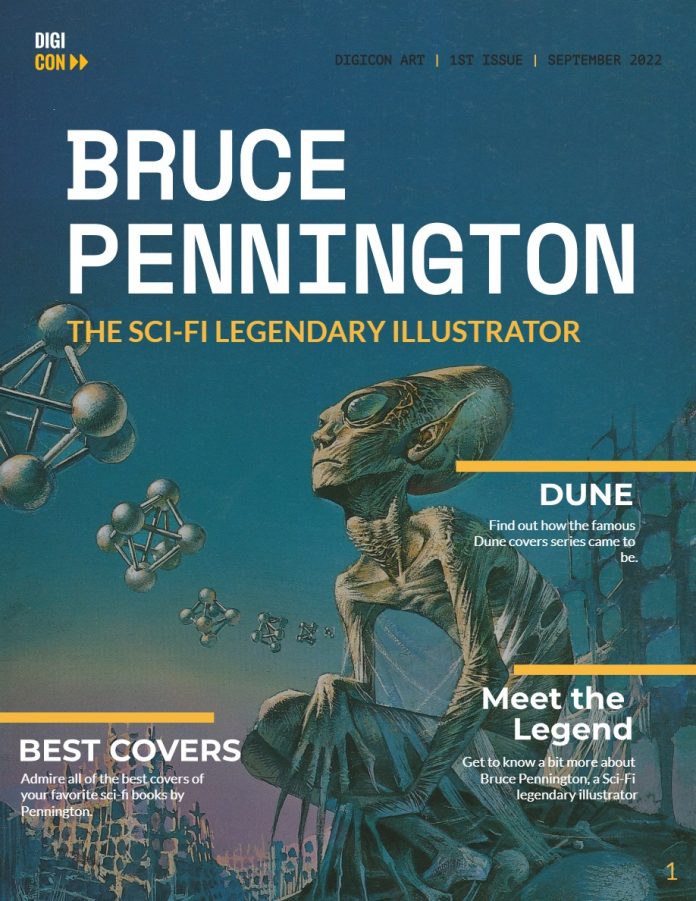 We asked Sci-Fi illustrator legend Bruce Pennington to tell us a bit about his history and his most famous work. Check this flipbook to witness his art!

When Bruce Pennington finished art school in the mid 1960s he was determined about one thing – that he did not want to be part of the Fine Art world as it then existed in London, which he found boring and pretentious. Some form of illustration appealed to him and by luck he soon landed a job at a small London agency producing film posters: “To my art teachers this was the ultimate sell-out, which made me even happier. I relished the sheer vulgarity of the block lettering and orgiastic details of the posters where, it seemed, anything went.”

In a way this work felt like a continuation of the Pop Art phase he’d been through at college. In only two months he succeeded in trading “Fine Art boredom for commercial art whoredom” and he loved it. Pennington happily churned out film posters for a couple of years and then moved into book covers in a variety of genres. His move into Science Fiction came in late 1967 when New English Library (NEL) commissioned him for the cover of Robert Heinlein’s Stranger in a Strange Land which became a storming bestseller that opened the way to a string of other SF covers in which he found he could freely exercise his lifelong love of the bizarre.

Pennington: “After the success of the [Heinlein] cover, in November 1967 I decided to take a holiday in the Scottish highlands. An ideal time to witness nature’s autumnal splendour. When I got back home there was a letter from NEL waiting for me. It read: ‘Dear Bruce, we’ve got an urgent cover for you, please contact us immediately.’ That cover turned out to be for the momentous Dune by Frank Herbert, the first in a trilogy of books I was given to illustrate.

“By the start of 1968 I was starting to exude a modest kind of confidence as other publishers were beginning to give me work. This was mainly in the form of a romantic novel, a history of the Second World War and two spy thrillers. I even got a horror story to illustrate from Mayfair magazine.

“As the 60s came to a close I was given a memorable series of books by Ray Bradbury to illustrate for Corgi Books. Each of them had a decorated silver surround that framed my pictures. All very evocative.

“Then as the 70s got going NEL gave me a series of science fiction novels by Brian Aldiss to illustrate. These established me as primarily a science fiction artist. By then, and for the next three years I was kept busy in that genre, though I did take on a few horror and fantasy covers for Panther Books in between.

“Throughout that period I was getting deeply immersed in Catholic mysticism and the prophecies of the French physician Nostrodamus in particular. My bedroom studio at that time had begun to look like a tiny chapel complete with candles and religious figurines.

“In January 1974 the very first issue of NPL’s groundbreaking magazine Science Fiction Monthly featured an interview with yours truly along with a photograph of me in my ‘ecclesiastical studio’. It was a case of fame at last from then on as I began to receive a substantial amount of fan mail. Posters of my work were a bi-product of the new magazine, which featured my work in nearly every issue.

“Throughout the rest of the 70s I worked mainly on science fiction and fantasy covers. Then in the early 80s Arrow Books rang me up asking me to call in their offices near Fitzroy Square. I was intrigued. Both art director Steve Lang and the chief editor were waiting for me when I arrived. They told me it was all about this series of science fantasy books from America they wanted me to do the covers for. The author was Gene Wolfe and they were keen to come up with something special for him. The more they described the theme and mood of the stories the more I liked what I heard. The first cover, Shadow of the Torturer, virtually painted itself as it was so vividly etched in my imagination from the start.

“With the success of the cover, especially with the author, others followed. I also picked up an award along the way from the British Fantasy Society. Throughout the rest of the 80s a steady flow of work kept me going.”

Through the 90s book cover work for Pennington began to decline, due largely to the advent of digital art on book covers. Some interesting projects did turn up though, such as two Tad Williams books Child of an Ancient City and Caliban’s Hour,  for which he not only produced the covers but illustrated the stories throughout.