Robert Cover made two spectacular interventions into mainstream legal theory in the 1980s. In the 1986 ‘Violence and the Word’ (Cover, 1986) he ripped aside the hermeneutic pleasantries of seeing law as an intellectual interpretative process to reveal the pain and death at the essence of law work.

In the 1983 ‘Nomos and Narrative’ (Cover, 1983) he created a lexicon and a framework for seeing law and legal meaning as culturally located and emergent. The 1970s-80s of American motor vehicle manufacturing is often referred to as the malaise-era. It is a term that can be applied to mainstream English-speaking legal theory from that time, post the erudite exegesis of HLA Hart and Lon L Fuller. This malaise era, of Ronald Dworkin, Joseph Raz, and law and economics, rendered law into an abstract, technical process of interpretative methods and other forms of pseudo-calculus.

Cover’s intellectual depth and economy of expression broke through this malaise. He connected law, legal practice, and legality to a dynamic and visceral real. In doing so he provided a gateway for critical and feminist legal theory into the mainstream.

I research and write about science fiction from within one of the critical legal movements that can identify Cover as a founder: Cultural legal studies. In cultural legal studies, we engage with nomos, Cover’s term for the view that humans inhabit a normative universe. This normative universe is scaffolded by time. Humans are beings of the present who experience the past and future. We suppress, remember, relive the past; we anticipate, plan, worry about the future. Creatures are composed of matter and time. In this materiality of temporal existence, there is a forever drive for meaning. There is a hunger to narrate, to mythologise, to tell stories that connect past to present, and, especially to provide a sense of future.

This habitation of a normative universe has a particular connection to the law in its modernist guise. Law in this epoch is about social control and certainty of the future. It is about institutions and constellations of power that attempt in the present to ensure stability, predictability and ideally provide for a better future. An obvious example of this structure can be seen in the consistent claims for law in the present to regulate technology to ensure a future free from imagined harms and manifesting hoped-for benefits.

In the ‘law for technological change’ example the dynamic and generative idea of nomos can be seen. Nomos connects collective dreaming and story-making to the institutional arrangement and legal forms directed towards the future. Culture and myth become reified as law.

In a present aware and marked by a sense of technological quickening, science fiction is important. Science fiction is a storehouse, a repository, and a playing within imaginings of human life and technology. While formal definitions of science fiction as a genre are complex and contested, its distinguishing hallmarks tend to be stories within a material, known, explainable (although often explained through technobabble) universe, a universe subject to ‘science’ and dealing with an imagining of the technological. It is the myth-form of technologically infused humanity.

The critical dimension to this is that nomoi are mercurial. They change, are contested, become formal and institutionalised, or give rise to resistance and disruption. Cultural legal studies of science fiction render this process visible and actively contribute to the forging of nomoi that tell better, more inclusive, and celebratory human futures. This does not mean that all and any science fiction across media and formats reveals potentially progressive nomos. Many are enclosed and affirm existing narratives and myths. There is a conserving towards the status quo, that existing relations, identities, and expectations, should be considered hardwired into the future. However, there are often, even in these science fictions, traces and gaps of new and suggestive ways of being human infused with technology. Often the vector for this change is the imaginings of non-human beings. Often the most human, the most intriguing character in science fiction is the robot or the alien. Another can be in a sense of the collective. In every imagining of a future that restates feudalism or empire or in the dystopian retelling of the state of nature and the social contract, there are often excesses and moments of complexity where some different way of assembling people into groups is projected.

Cultural legal studies often involve working the traces within cultural artefacts to show that foundational values and conceptions, that might seemingly run against the orthodox are alive within the popular zeitgeist. Mainstream US space opera franchises tend to contribute to liberal narratives of natural rights, freedom, and challenging repressive regimes, that do not primarily make space for diversity of subjectivity away from the rights-bearing male of legal liberalism. Yet often within the stories told on television and film there are moments of crisis, mismatch, and the sketches of radically different alternatives. Furthermore, there are science fictions where the transformative nomoi are more prioritised intra-text. In my work, guided by the suggestions by Donna Haraway in her psychedelic and paradigmatic disrupting ‘Manifesto for Cyborg’ text (Haraway, 1985) the novels by Samuel R Delay, Ursula Le Guin and Octavia E Butler have provided obvious locations for challenging alternative nomos.

Mercury, the god, the planet, the metal, reference fluid speed. Movement and change. Cover’s account of law and nomos is to present an account of the law and human life where the stories we tell each other are not just mindless consumption (although there can be a lot of that) but are a shared telling of the world to come. There can be changes in the stories we tell and the myths shared. Nomoi are mercurial. Cultural legal studies as a discipline inherently fixated on the legalities generated and destroyed by nomoi, understands this telling of the world. And as this world is a world of technologically infused humans, science fiction is the most obvious and ready-at-hand maelstrom of narrative and myth to inform this telling.

Cultural legal studies of science fiction matter because it is a privileged location through which to tell, dream and imagine not just a better world, but the forms of legality through which it can be reached. Mercurial nomoi can never be bottled, but they can be studied, learned from, and encouraged to flow in desirable ways. 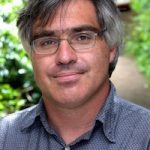 Artist Showcase: The Robot Next Door