What is digital constitutionalism?

One of the central promises of the current UK government was to liberate the UK from the shackles of EU regulation, thereby doing away with much of the bureaucratic ‘red tape’ that EU laws the Brexiteers claimed placed unjustified burdens on business.  The EU data protection regime is considered an exemplar.  In his introduction to the consultation paper released on 10 September 2021, entitled ‘Data: A New Direction’, the sponsoring Minister Oliver Dowden proudly states, ‘our ultimate aim is to create a more pro-growth and pro-innovation data regime whilst maintaining the UK’s world-leading data protection standards’.   Although he states that ‘the protection of people’s personal data must be at the heart of our new regime’, the proposals are entirely directed towards removing existing data protection standards.  At the same time, any reference to individual privacy and data protection as a fundamental right is strenuously avoided across the entire consultation document. Underpinning these proposed reforms lies an unshakeable belief that digital innovation is an unmitigated good that will lead to a prosperous future overflowing with abundance—or, to use Oliver Dowden’s words, ‘usher in a new golden age of growth and innovation right across the UK as we build back better.’

These proposed reforms rest on an extraordinarily naive faith in the nature of digital innovation.  They are underpinned by set of deeply questionable assumptions which—taken together—reflect a deliberately oversimplified contemporary fairy-tale which I refer to as ‘the Digital Enchantment’.  This fairy-tale is comprised of three core tenets: digital solutionism, the absence of ill-effects doctrine, and the celebration of unfettered innovation as one of the noblest and highest callings of this present age.  Each element is outlined below.

The first element of the fairy-tale, digital solutionism, is a variant of ‘technological solutionism’, which rests on a belief that the internet and smart devices can be depended upon to solve personal and social problems through the sharing and analysis of data.   Digital solutionism refines and builds upon this basic premise.  It proceeds on the assumption that networked digital technologies will provide reliable solutions to almost any problem, and will do so in a straightforward process of ‘plug and play’ through which the technology’s promised benefits will instantly materialise.    So understood, digital technologies are almost magical in power: with a quick sprinkle of digital pixie dust, new data-driven services can be relied upon instantly to fulfil our needs, easily parachuted into any social, organisational or cultural context without any need for prolonged difficult hard-graft, to wrestle with tensions and conflict between competing needs, interests, values and priorities, or to accommodate existing organisational practices and domain-specific cultural norms of appropriateness. It conjures up images of a perfect, multi-talented digital assistant who is at once both a digital Jeeves—the well-trained butler who anticipates and unobtrusively relieves us from the multiple mundane tasks of everyday life, and the Ultimate Data Scientist, devising algorithmic models that, once implemented, will eliminate poverty, hunger, disease, global warming and every other serious intractable challenge that we have failed to address satisfactorily down through the ages.   Yet the Digital Enchantment does not require the production of any evidence that these technologies will deliver on their grand promises.  Rather, we can simply expect that, as night follows day, new networked digital systems and services that do emerge will in fact do so, reliably, responsively and without tears.

(b) The no ill-effects doctrine

According to the second element of the Digital Enchantment, we can assume that digital technologies will not, and do not, produce any unintended ill-effects. In other words, digital technologies are to be viewed almost exclusively from a one-sided, celebratory light, ignoring (or at least very substantially downplaying) any adverse or unwanted impacts that these technologies might generate, whether for individual users, those they interact with, the general public or the social, political, economic and cultural environment in which they are embedded and intended to operate.   Even data-driven systems that collect and process personal data and therefore invariably implicate concerns about individual privacy are typically dismissed in one of three ways: you’ve given it up already, that nothing has changed, or your data is necessary to maintain and improve the service.

The third tenet of the Digital Enchantment posits that digital innovation is an intrinsically valuable good of such paramount importance that the innovation process must be protected as sacred and sacrosanct.   The relationship with digital innovation that we should endeavour to cultivate is that of romantic devotion.  The hero of this story is the private entrepreneur, who despite the occasional flaw, courageously risks his (and it is typically a him) labour, capital and energy in the noble quest to solve problems, eradicate diseases, while offering us new adventures and a larger pie.   Yet our hero must contend with many villains who seek to obstruct his path, ranging from policy-maker, academic expert or civil society activist, all of whom are enemies of progress.  This call to worship at the shrine of innovation characterises the innovator’s freedom to experiment as a basic right that accrues to all those involved in the innovation process irrespective of shape and size, ranging from the amateur hacker through to the global Digital Tech Titan.  The scope and content of this right is extraordinarily broad: including a presumptive right to appropriate any data about the location and behaviour of any thing, creature or person, anywhere, at any time, reaching beyond planet Earth into the reaches of outer space and any other domains which the innovator is entitled to exploit if he has the ingenuity to find ways to enter and appropriate data from the territory of interest.   To espouse restraint or express resistance by those who regard such attempts as intrusive incursions, is to be ‘anti-innovation’ – fearful, unenlightened Luddites who are blind to possibilities.  Such opposition is best understood as a temporary aberration: it is only by breaking existing norms that the digital entrepreneur can enter previously unoccupied territory – all of which lies available for colonisation and appropriation in the service of building wonderful new digital products and services.  Eventually, so the story goes, this initial resistance will give way as sceptics start to appreciate just how important and indispensable these services are.   The critical lesson is that the innovation process must be left free and unfettered, summed up in the familiar slogan beloved of the digital tech industry: ‘regulation stifles innovation’.

Why must the Digital Enchantment be dispelled?

Threaded together, the three elements of the Digital Enchantment produce a compelling narrative that celebrates the almost magical power and indispensable value of unfettered data-driven digital innovation that is capable of seamlessly solving all our problems, large and small.  If only we have faith in data and the power of the innovation process, particularly when opposition is encountered and the prospects appear perilous and uncertain, we can look forward to a beautiful future in which our societies no longer need to endure hunger, thirst, illness, disability, poverty or the destructive impacts of climate change while as individuals we enjoy an abundance of personalised services and conveniences that will perfectly meet our every need.

Each of the Enchantment’s three tenets cannot withstand critical scrutiny, even of the most superficial kind.    We cannot assume that digital technologies will ‘solve’ all our social problems.  This is not to suggest that digital technologies might not have enormous value in contributing towards developing effective responses to address difficult problems, but they are not magic bullets.  At the same time, digital technologies have the potential to impact on individuals, communities and our broader environment in unwelcome, harmful and corrosive ways.  It is clear from this sketch that the Digital Enchantment’s response to digital innovation is highly partial and utterly unrealistic. Like one overtaken with the first flush of new love, immersed in the promise of new romance, those under the Enchantment’s thrall see only their beloved’s virtues and strengths while blinded to any failures or character flaws.  And to the extent that we might be willing to concede that our new love-object may possess some less-than-flattering attributes, our inclination is to downplay them, rather than inquire further.

But by focusing only on the promises of digital innovation, we not only fail to address its direct and immediate adverse impacts (including, but not limited to the way in which many of our current digital technologies interfere fundamental rights, including the rights to privacy and other basic liberties), but we will also fail to reckon with the longer-term impacts on our shared, collective foundations.    Consider for example the first Industrial Revolution: we readily champion the major improvement in living standards and human well-being that are a by-product of the capacity to radically scale up the manufacturing process it enabled.  But we are now being forced to reckon with the urgent, looming climate catastrophe that has resulted from our failure to recognise, identify and address the destructive impact of burning fossil fuels which were unaware of at the time of the Industrial Revolution’s emergence.

We are, in my view, in serious danger of making exactly the same kind of potentially devastating mistake, viewing digital innovation through a similarly asymmetrical lens.  If we are to cultivate a networked digital future in which human communities and individuals can flourish, we must break free from the Digital Enchantment’s spell to develop a more clear-eyed, realistic and richer account of the relationship between regulation, digital innovation and society. It requires us to recognise that there are no quick-fixes, and there are no simple solutions, to complex social problems.  Nor can we have our cake and eat it too: difficult normative choices will be required, and on these matters, people will have different commitments and priorities.  But they are decisions that we cannot afford to delegate to the unfettered forces of the market, particularly in a world wrought with profound distributional inequalities in power, resources and opportunities.  We must proceed in a manner that encourages and ensures ample and regular opportunities for public debate and deliberation in seeking to construct the kinds of policies and governance regimes needed to nurture and sustain the health of the democratic commons upon which meaningful human agency depends.   In other words, we must make these decisions about how to live well in a networked digital age collectively, consciously and intentionally with the goal of nurturing flourishing human communities, rather than guided by a continuing pre-occupation with ‘unleashing technological power’ in ways that we may well live to regret.

Originally posted on the Birmingham Law School Research Blog. The author delivered the Edinburgh Future Lecture with the same title on 5 May 2022.

Karen Yeung. ‘Dispelling the “Digital Enchantment”: Why worshipping at the shrine of digital innovation is misguided and dangerous’ (The Digital Constitutionalist, 06 June 2022) <https://digi-con.org/dispelling-the-digital-enchantment/> 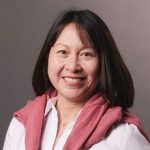 Interdisciplinary Professorial Fellow in Law, Ethics and Informatics at University of Birmingham