Digi-Conference II agenda is out!

“For foreign fighters, Ukraine offers purpose, camaraderie and a cause”.

And for right-wing extremists, Ukraine offers a training ground, just as the armed conflicts in the Western Sahel and the Middle East did for Jihadist groups. ISIS’ call in 2014 for a global defense of the caliphate it had just formed constituted the biggest recruitment effort to date. That is, until the ultranationalist battalion AZOV copied and improved upon this model, with a recruitment campaign launched via their Telegram channel and their official website. By 2019, an estimated 17,000 combatants from 50 countries had heeded the call to arms. As of early 2022, the number of extreme right fighters mobilized to Ukraine has grown to over 20,000 fighters.

Brothers in the online sphere: the extreme right and ISIS

There are indeed many similarities between these two seemingly opposing extreme forces: the extreme right and the Jihadist movement. It is precisely the point of this article to review how extreme right groups worldwide have copied and adapted Jihadist ground-breaking techniques for propaganda and socialization in the online sphere. We also reflect on the peculiarities of right-wing violence in the West, and some unique conditions that have facilitated its growth.

As we have seen, this online sphere is actually the first step for foreign fighters wishing to join the Ukraine, and previously Crimean, conflict. Extremism research has been alerting us of how right-wing groups exploit social platforms like Facebook or Discord and messaging apps like Telegram for foreign fighter deployment, expanding their base and providing coordination and logistical support.

Extremist uses of the online sphere move beyond recruitment to specific national territories and conflicts, and do not discriminate among nationalities. First and foremost, we should consider how online spaces provide a socialization platform for extreme-right groups, in the same way they did for Jihadi groups. In recent years, “mainstream” social media platforms like Facebook, Twitter or YouTube have started cracking down on extremist and terrorist content, mainly targeting disinformation campaigns and hate speech. This has motivated a migration of extreme groups to more niche platforms, like Gab, or those with stronger encryption routines, like Telegram.

Nevertheless, the need for unmonitored online platforms responds to, firstly, an extreme right need for the free distribution of propaganda. For these groups, however, and following in ISIS’s footsteps, propaganda has long moved from the stuffy pamphlets and long-winged speeches of the past. Nowadays, propaganda is all about memes and the gamification of violence. Memes, in particular, serve a double purpose: they attract a younger audience, and they often escape traditional terrorist content regulations due to their obscure mix of pop culture references and ideological tidbits.

Gamification is defined as the use of video-game functions within non-game contexts, such as score-tracking or achievements “unlocked” after completing certain scenarios. This familiar structure is filled with anti-Semitic, Islamophobic, homophobic or white supremacist propaganda, often in the form of Internet memes or video materials. The use of game elements allows terrorist groups to turn violence into a “game”, further glorifying successful terrorists and propping them up as an example to their bases. The end result is a highly successful and far-reaching form of extremist propaganda delivery: with a familiar and appealing format, it reaches both young and not-so-young audiences, who are much accustomed to the social aspects of online gaming. This use by right-wing groups of gamification elements as part of online recruitment campaigns follows similar patterns to the strategies previously developed by ISIS as a means of online recruitment and logistical support.

Logistical support is the second way in which extreme right groups mirror Jihadi uses of online platforms: for the organization of gatherings. These gatherings can go from political-style conventions to combat training camps where attendants are instructed in the use of firearms and fighting techniques. Both types of gatherings share an important dose of indoctrination and ideological brainwashing and often constitute a solidification of online indoctrination and socialization into extreme groups’ routines. Right-wing reunions often have a transnational component, being either held in a country different from which the group springs from; consisting of more than one nationality, or attracting a combination of nationalities in a third location. The logistics behind these reunions would be impossible without the use of online platforms, not to mention online payment methods as well as anonymous booking services for venues and transport.

Out of sight, out of mind?

These facts, however, do not mean that the extreme right has disappeared from mainstream social media platforms: indeed, quite the contrary. Facebook, more prominently, and its subsidiaries like Instagram have a rocky trade record in terms of hosting and allowing the extreme right to flourish and share hateful speech and indoctrination materials online. Similar warnings have been issued regarding the popular video-sharing app TikTok.

In comparison with ISIS or Al Qaeda, a remarkable difference is that the denomination of right-wing groups or individuals as terrorists has been much slower. This is partially due to political apathy or unwillingness to confront right-wing violence and partially due to the very nature of the extreme right as a fluid and composite group whose members frequently have no known association with established terrorist networks. In fact, very few extreme-right groups themselves have official terrorism designations. This non-inclusion of far-right groups in national and international terrorist lists complicates the identification of extreme-right propaganda.

This legislative and judicial blind spot, in turn, affects private tech companies, policymakers and law enforcement alike, who are, for example, left without explicit guidelines on where legitimate free expression ends and hate speech starts. To complicate matters further, the participation of online companies in content removal operations of right-wing content remains a work in progress. In fact, private tech companies have often dragged their feet in complying with content removal orders and criminal investigations. A new EU Regulation on the matter is bound to accelerate private-public cooperation on terrorist content removal online.

Ukraine: a victory for right-wing extremism?

The war in Ukraine presents yet another sea of possibilities for the extreme right to imitate successful Jihadist practices and develop their own. At the very least, the conflict has created a perfect opportunity for the recruitment of extreme right foreign fighters, who either seek training and like-minded networks with deployment in sight or wish to further their engagement in other ways, via donations, organizing transport or offering other types of logistical and material support.

While Putin’s claims that the Ukrainian government is run by neo-Nazis are a blatant lie, there are indeed factions of Ukrainian fighters with links to white supremacist or neo-Nazi movements in the last decade. Chiefly among them features the ultranationalist Azov Battalion, known for fighting against pro-Russian separatists in Ukraine in 2014. The Azov Batallion, for example, went as far as becoming a volunteer arm of the Ukrainian National Guard, thus effectively integrating thousands of people in paramilitary groups into the official Ukrainian army.

The Ukranian-Russian conflict has indeed provided right-wing groups with important training and real combat experience. At the same time, these groups have also gained political and social influence in Ukraine, with youth camps and its own cultural venues. In a way, Azov has become an international brand among extremists worldwide; Azov “merchandise” (stickers and patches) have been seen around the globe at different venues of right-wing activity, such as a Neo-Nazi counter-protest in Tennessee, where the Confederate flag shared space with an Azov clothing patch.

The Azov Batallion itself has openly welcomed Westerners into its ranks via white-supremacist sites. This call has been echoed by like-minded chat groups and channels in various languages. This call has attracted several hundred global volunteers with links to white supremacism and far-right extremism traveling to Ukraine. Such a level of worldwide recruitment activity strongly echoes the declaration of the so-called caliphate in 2014, when ISIS reached out to sympathizers globally to join its fold or contribute in whatever way possible.

As we have seen, there are important parallels between the extreme right and Jihadist tactics for online recruitment and exploitation of foreign conflicts in hopes of recruitment. The question now is what to expect in the next few years. On the one hand, there is a very real threat in the shape of returning foreign fighters. Those who successfully make it back from Ukraine could return home with weapons and significant combat experience to better train local groups and facilitate violence domestically or internationally. On the other hand, there are also right-wing actors who will ultimately stay in Ukraine, where they can further expand their online influence as well as continue to build political and social support for their movements.

At this point, it is perhaps still too early to tell what will happen in Ukraine and the repercussions it will have for the rest of Europe and the world, especially considering the inter-connectedness of right-wing groups through the online sphere. Nowadays, a win for a Neo-Nazi group on the Ukrainian war front or a successful terrorist attack elsewhere in the world can quickly spread to be a rallying point for new recruits to join domestic or international extreme right movements.

Significant advances in the fight against right-wing extremism online will most definitely be tied to the political developments worldwide, namely to the rise of far-right parties to government. Finally, swift and decisive action against extreme-right actions will depend on the joint willingness of international organizations, national governments and tech companies to take the extreme-right threat seriously, be it online activity or a shared ride to the Ukrainian front.

Inés Bolaños Somoano is a PhD candidate at the Political and Social Sciences Department of the European University Institute (Italy). Her research looks at the emergence and consolidation of Prevention of Radicalization and Violent Extremism as a distinct policy field in the European Union. Her secondary focus is on European right-wing extremism and online radicalization. Inés is a qualitative researcher, using elite interviews, archival evidence and policy analysis. 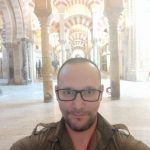 Sergio Gracia studied law at the University of Córdoba. He holds a Master's degree in “Terrorist Phenomenology: Bioterrorism, Epidemiological Prevention, Cyberterrorism, and Chemical Threats”. He is the director of CINVED. Gracia practiced law in Casa Árabe Córdoba. Gracia frequently acts as the invited expert commentator for different national and internationalmedia outlets on international relations and right-wing violence issues.